"The two-plate diptych portrait of Big Sleeps was the first in a series of artists I photographed using two frames. Foremost, it was to show their studios or particular art works using straight on perspective so there was no distortion. With Sleeps it was more emotional, he is such an amazing individual as well as a great artist. For everyone who knows him, a huge part of his persona is this crazy, life-size face tattooed on the back of his head. The night before the shoot at The Container Yard I thought, how could I possibly make an honest portrait of Big Sleeps without also showing this other character tattooed on the back of his head? Sleeps and Prime have been friends since elementary school, growing up in the very rough LA neighborhood of Pico Union. By 16 years old, Prime was a star street artist, a sort of David Hockney in a hidden alternative culture. It’s no secret; both Prime and Sleeps have seen lots of trouble and have pulled themselves out of it. Today, Prime has work in the Getty Museum and other such major collections. His studio in South Central LA is a hub of artists coming and going, his peers consider him a master; his work and opinions are given great respects. Sleeps travels the world, painting and tattooing and giving pro-bono art seminars to disadvantaged kids. 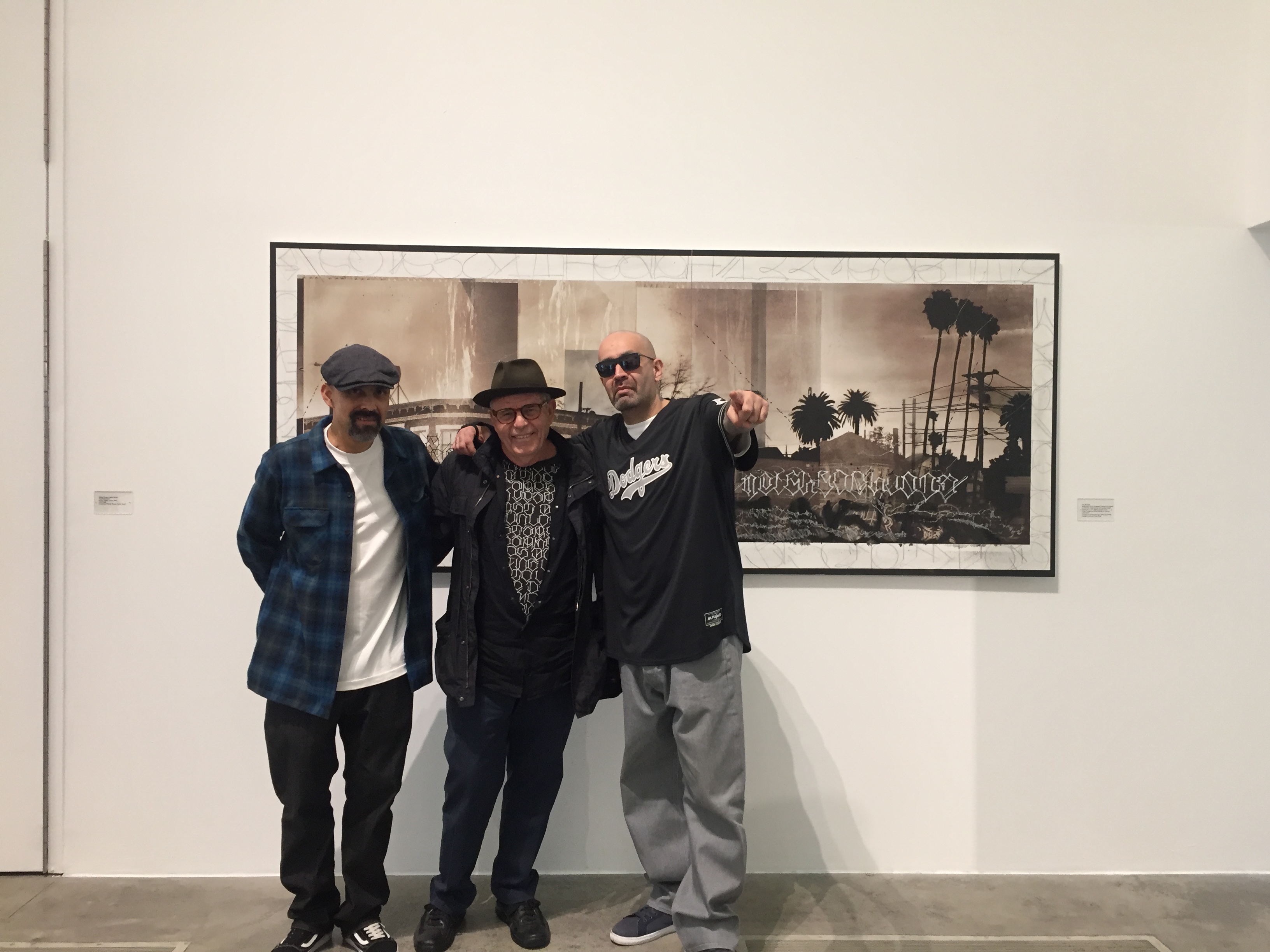 In the time we have spent together they have been a great inspiration to me. I have spent many years photographing LA’s urban landscape with various types of 4"x5" and 8"x10" Polaroid film, focusing on individual landmarks, like the Cocoanut Grove or the Hollywood Roosevelt Hotel. More recently, as gentrification turns cities on their head, I’ve searched out the older, disappearing urban neighborhoods themselves. Collaborating with Sleeps and Prime has brought immediacy to the pictures, because these are the very streets where they grew up. “Washington Blvd.” in the Dark Progressivism exhibit is a 44”x117” Innova matte canvas print combining over 25 individual Polaroid images with the artists’ mixed media hand lettering and drawing. To be a part of this kind of work is very rewarding. We have become good friends, Big Sleeps and Prime have been my passport to a whole other Los Angeles. A world of remarkable artists who have existed in a culturally separate parallel universe.

Pieces from McHugh, Sleeps, and Prime will be featured at the Museum of Art and History's special exhibition, Dark Progressivism: The Built Environment; guest-curated by Rodrigo d’Ebre and Lisa Derrick, inspired by d’Ebre’s 2016 controversial documentary film Dark Progressivism. This exhibition highlights the street and public art movements that characterize Los Angeles’ Southland.

All photos courtesy of Jim McHugh.

ART SHOW at The Container Yard

How to Capture Amazing Photos This Halloween