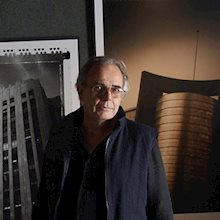 Famous for his recent large format Polaroid prints of Los Angeles, Jim McHugh has been photographing common things in an uncommon manner for thirty years. McHugh attended the Masters Program at the UCLA Film School. He has since been a contributing photographer to People Magazine, the official photographer for the Grammy Awards and is currently on the masthead of Architectural Digest.

Jim's photography has garnered many awards and is included in prominent collections such as The Museum of Modern Art, The Walker Art Center and The Polaroid Collection. Jim has exhibited widely; nationally and internationally, with large solo exhibitions at the Santa Monica Museum of Art and the James Corcoran Gallery in Los Angeles. A selection of these pictures was shown at Art Miami 2009 presented by Timothy Yarger Fine Art.

Known equally for his portraiture, McHugh has published several books of artists portraits including "The Art of Light and Space" by Abbeyville Press and "California Artists: New Work" by Chronicle Press. His portrait of David Hockney is the cover of Hockney’s book "That’s the Way I See It." Jim Mchugh won the International Photography Awards’ First Prize for Fine Art Photography 2007 and The George Eastman House Best of Show for Architectural imagery of Los Angeles.

By Jim McHugh Nov 20, 2017
"The two-plate diptych portrait of Big Sleeps was the first in a series of artists I photographed using two frames. Foremost, it was to show their...
Read More